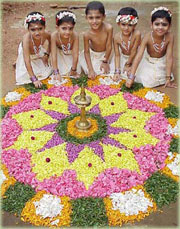 TRIBUTE TO THE GREAT MASTERS

FESTIVAL OF MUSIC AND DANCE

Next week, the Cochin Film Society is conducting a two-day festival of short films on music and dance. The 'Festival of Music and Dance,' is being organised in association with the Films Division of India. Eleven films from the collection of the Films Division will be screened at Kerala Fine Arts Hall in Ernakulam. The festival will be inaugurated by the reputed film maker Mohan. Anupama Mohan, the well-known Kuchipudi dancer, will be the chief guest. Sudha Namboothiri, Media Officer, Press Information Bureau, will offer felicitations and Film Society president C.S.Jayaram will preside over the inaugural ceremony to be held at 5.30 on August 13 at the Fine Arts Hall.

Admission to the festival is open to all.