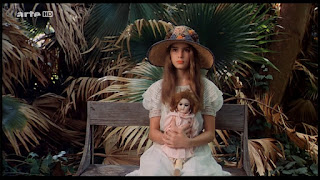 Pretty Baby
Directed by Louis Malle
Screenplay: Polly Platt
Starring Brooke Shields
Keith Carradine
Susan Sarandon
Music by Ferdinand Morton
Cinematography Sven Nykvist
1978
109 minutes
The film is set in 1917.  Hattie, a prostitute working at an elegant brothel run by the elderly, cocaine-sniffing Madame Nell, has a 12-year-old daughter, Violet, who also lives at the house. When photographer Ernest . Bellocq comes by with his camera, Hattie and Violet are the only ones awake. He asks to be allowed to take photographs of the women. Madame Nell only agrees after he offers to pay.
Bellocq becomes a fixture in the brothel, taking many photographs of the prostitutes, mostly of Hattie. His activities fascinate Violet, though she is frustrated by the long, precise process Bellocq must go through to pose and take his pictures.
Nell decides that Violet is old enough for her virginity to be auctioned off. After a bidding war between regulars, Violet is bought by an apparently quiet customer, but this first sexual experience is unpleasant. Hattie, meanwhile, aspires to escape prostitution. She marries one of her customers and goes to St. Louis without her daughter, whom her husband believes to be her sister. Hattie promises to return for Violet once she’s settled and broken the news to her new spouse.
Violet runs away from the brothel in a fit of temper after being punished for some hijinks, showing up on Bellocq’s doorstep. The two become lovers, although Violet still needs a great deal of attention and is frustrated by Bellocq’s devotion to his work. For his part, the (perhaps asexual) older man is entranced by Violet’s beauty, youth, and photogenic face.
Violet eventually returns to Nell’s after quarrelling with Bellocq, but social reform groups are forcing the brothels of Storyville to close. Bellocq arrives to wed Violet, ostensibly to protect her from the larger world.
Immediately following the wedding, Hattie and her husband arrive from St. Louis. They claim that Violet’s marriage is illegal without their consent and plan to take her back with them. Violet would like her husband to come with her, but he lets her go, realizing a more conventional life, and schooling, will benefit her more.
Awards
The film won the Technical Grand Prize at the 1978 Cannes Film Festival.
Louis Malle
Versatile controversial  French and Hollywood film maker. He made films for more than 40 years, winning innumerable awards starting with Le Monde du silence (1956) at Cannes and Oscar to ‘Goodbye Children at Venice in  1987. His last feature film was Vanya on 42nd Street (1994) . Malle is sometimes associated with the nouvelle vague - though his work does not directly fit in or correspond to the auteurist theories that apply to the work of Godard, Truffaut, Chabrol, Rohmer, and others, and he had nothing whatsoever to do with Cahiers du cinéma, he did exemplify many of the characteristics of the movement, including using natural light, and shooting on location. He reveled in  tackling taboo subjects: The Fire Within ("Le Feu follet", 1963) centres on a man about to commit suicide, Murmur of the Heart (1971) deals with an incestuous relationship between mother and son and Lacombe Lucien (1974), co-written with Patrick Modiano, is about collaboration with the Nazis in Vichy France in World War II .
In 1968 Malle visited India and made a seven part documentary series L’Inde fantôme: Reflexions sur un voyage and a documentary film Calcutta, which was released in cinemas. Concentrating on real India, its rituals and festivities, Malle fell afoul of the Indian government, which disliked his portrayal of the country, in its fascination with the pre-modern, and consequently banned the BBC from filming in India for several years. Malle later claimed his documentary on India was his favorite film 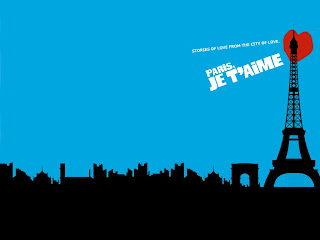 Paris, I Love You

Director: Bruno Podalydès
A man parks his car on a Montmartre street and muses about how the women passing by his car all seem to be "taken". Then a woman passerby faints near his car, and he comes to her aid.
2
Director: Paul Mayeda Berges and Gurinder Chadha

A young man, hanging out with two friends who taunt all women who walk by, strikes up a friendship with a young Muslim woman.
3
Director: Gus Van Sant A young male customer finds himself attracted to a young printshop worker and tries to explain that he believes the man to be his soulmate, not realizing that he speaks little French.
4
Director: Joel and Ethan
A comedy in which an American tourist waiting at the Tuileries station becomes involved in the conflict between a young couple after he breaks the cardinal rule of avoiding eye contact with people on the Paris Metro.
5
Director: Walter Salles and Daniela Thomas

A young immigrant woman sings a Spanish lullaby ("Qué Linda Manita") to her baby before leaving it in a daycare. She then takes an extremely long commute to the home of her wealthy employer (whose face is not seen), where she sings the same lullaby to her employer's baby.
6
Director: Christopher Doyle A comedy in which a beauty products salesman makes a call on a Chinatown salon run by a woman who proves to be a tough customer.
7
Director: Isabel Coixet

Prepared to leave his marriage for a much younger lover, Marie Christine, a man named Sergio instead decides to stay with his wife after she reveals a terminal illness - and he rediscovers the love he once felt for her.
8
Director: Nobuhiro Suwa

A mother, grieving over the death of her little boy, is comforted by a magical cowboy.
9
Director: Sylvain Chomet

A boy tells how his parents meet in prison and fall in love.
10
Director: Alfonso Cuarón

An older man and younger woman meet for an arrangement that a third person ('Gaspard'), who is close to the woman, may not approve of. It is eventually revealed that the young woman is his daughter, and Gaspard is her baby. The film was shot in a single continuous shot. When the characters walk by a video store, several posters of films by the other directors of Paris, je t'aime are visible in the window.
11
Director: Olivier Assayas
An American actress procures some exceptionally strong hashish from a dealer whom she gets a crush on.
12
Director: Oliver Schmitz

A Nigerian man dying from a stab wound in the Place des fêtes asks a female paramedic for a cup of coffee. It is then revealed that he had fallen in love at first sight with her some time previously. By the time she remembers him, and has received the coffee, he has died.
13
Director: Richard LaGravenese

An aging couple act out a fantasy argument for a prostitute in order to keep the spark in their relationship.
14
Director: Vincenzo Natali

While visiting Père Lachaise Cemetery, a young woman breaks up with her fiancé, who then redeems himself with the aid of advice from the ghost of Oscar Wilde.
16
Director: Tom Tykwer

After mistakenly believing that his girlfriend, a struggling actress, has broken up with him, a young blind man reflects on the growth and seeming decline of their relationship.
17
Director: Gérard Depardieu and Frédéric Auburtin

A separated couple meet at a bar for one last drink before the two officially divorce.
18
Director: Alexander Payne

Carol, a letter carrier from Denver, Colorado on her first European holiday, recites in rough French what she loves about Paris. 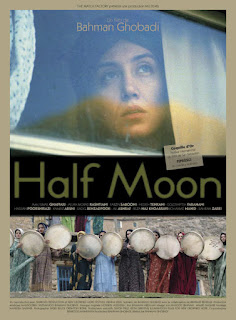 Mamo, an old and legendary Kurdish musician living in Iran, plans to give one final concert in Iraqi Kurdistan. After seven months of trying to get a permit and rounding up his ten sons, he sets out for the long and troublesome journey in a derelict bus, denying a recurring vision of his own death at half moon. Halfway the party halts at a small village to pick up female singer Hesho, which will only add to the difficulty of the undertaking, as it is forbidden for Iranian women to sing in public, let alone in the company of men. But Mamo is determined to carry through, if not for the gullible antics of the bus driver.

Born in 1969 in the province of Iranian Kurdistan, near the Iran-Irak border, Ghobadi’s first feature film was "A Time for Drunken Horses" (2000), the first Kurd film in the history of Iran. This film, “Turtles Can Fly” 2004), “Marooned in Iraq” (2002) and all the others made by Ghobadi were hits in the festival circuit, garnered dozens of awards but were little seen or not seen at all in his native country. His last movie to date, filmed without official permit, rapidly and feverishly, "No One Knows About Persian Cats " (2009) is a remarkable semi-documentary about underground music in Tehran. 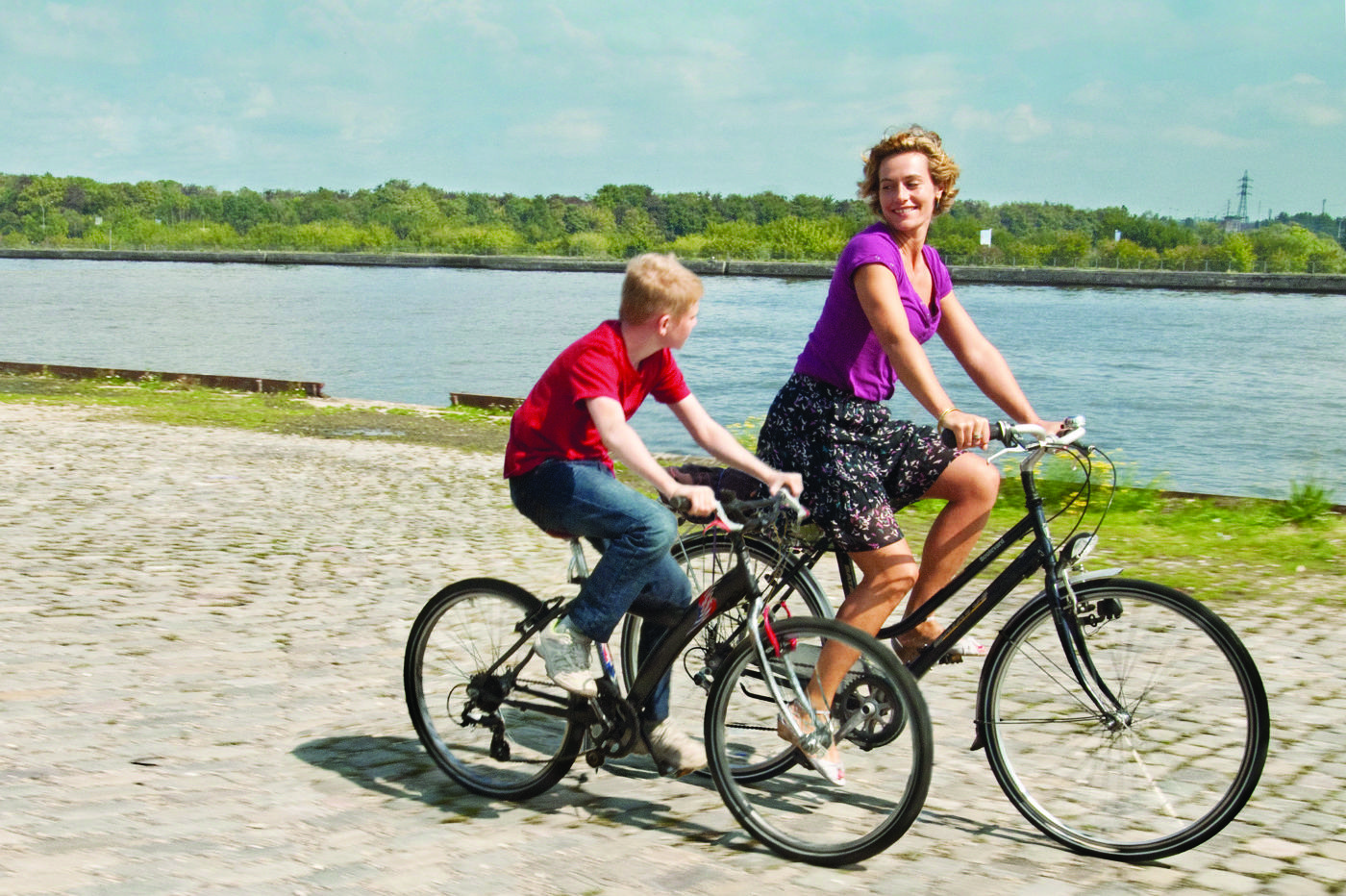 The Kid with a Bike (French: Le Gamin au vélo) is a 2011 drama film written and directed by the Belgian brothers Jean-Pierre and Luc Dardenne, starring Cécile de France and Thomas Doret. Set in Seraing, it tells the story of a 12-year-old boy who turns to a woman for comfort after his father has abandoned him
The film was produced through companies in Belgium, France and Italy. While it does not deviate from the naturalistic style of the Dardenne brothers' earlier works, a brighter aesthetic than usual was employed, and the screenplay had a structure inspired by fairytales. Unusually for a film by the directors, it also uses music. It premiered at the 2011 Cannes Film Festival and won the festival's Grand Prix.

The story begins with Cyril, a 12-year-old boy in foster care, searching for his father and lost bike. Cyril escapes the foster home to try to find his father at his old apartment. When the caretakers find him, Cyril flees to a doctor’s office nearby, where he grabs onto a woman in the waiting room. Trying to alleviate the situation, the caretakers take Cyril to the empty apartment, confirming that his father has really abandoned him.

The next morning, the woman from the doctor's office, Samantha, shows up with Cyril’s bike. She says she bought it from someone in the projects, but Cyril thinks it was stolen from his dad. He likes Samantha though, and asks if she would take him in on weekends. Later, through an old personal ad, Cyril discovers that his father actually sold his bike. With Samantha, Cyril is able to finally track down his father. However, his father isn't happy to be found and tells his son never to come back.

Cyril, heartbroken by his father's rejection, turns to Samantha for comfort. But despite Samantha's care, Cyril is soon taken under the wing of a local gang leader known as "The Dealer." At The Dealer’s prompting, Cyril robs a newsstand owner and his son with a baseball bat. The Dealer, fearing Cyril had been identified, threatens him to keep quiet and forces him to keep the money. Cyril tries giving it to his father only to be chased away. Dejected, Cyril returns to Samantha and finally accepts her care for him. The robbery is settled through mediation, where Cyril apologizes personally to the owner, who accepts, but his son does not and, in a chance encounter, tries to get his revenge. In the ensuing chase, Cyril climbs from a tree and falls when struck by a rock the son throws. While he lies unconscious, the owner and son discuss what lies to tell the police. While they're talking, Cyril comes to and walks away, having apparently decided to move on with his life.
posted by COCHIN FILM SOCIETY No comments: