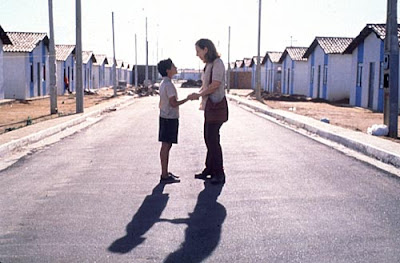 Central Station (Portuguese: Central do Brasil) is an Academy Award-nominated and Golden Globe-winning 1998 drama film set in Brazil. It tells the story of a young boy's friendship with a jaded middle-aged woman. The movie was adapted by Marcos Bernstein and João Emanuel Carneiro from a story by Walter Salles and it was directed by Salles. It features Fernanda Montenegro and Vinícius de Oliveira in the major roles. It was an international co-production between Brazil and France. The film's title in Portuguese, Central do Brasil, is the name of Rio de Janeiro's main railway station.

Dora is a former school teacher who is now a bitter old woman. She works at Rio de Janeiro's Central Station, writing letters for illiterate customers in exchange for some money. She hates her customers, and often does not mail the letters she writes, putting them in a drawer or even tearing them apart. Josué is a poor 9-year-old boy who has never met with his father, Jisus, but hopes to do so. His mother sends letters to his father through Dora, saying that she hopes to reunite with him soon, but when she is run over and killed in a bus accident in the station, Josué is left helpless. Dora takes him in and sells him, but encouraged by her friend Irene, later steals him back.

Dora is initially reluctant to be responsible for the boy, but she ends up deciding to take a trip with him to Nordeste, in order to find his father's house and leave him there.

Dora tries to leave Josué on the bus but he follows her, forgetting his rucksack which contains Dora's money. Penniless, they are picked up by a kindly, religious truck driver who abandons them when Dora grows too friendly. By hitching they reach Jisus' house but he has sold it to buy alcohol. In the town, Josué saves them from destitution by suggesting Dora write letters for pilgrims. This time, she posts the letters.

By chance, they find Josué's two half-brothers. Their father has disappeared, but Dora reads the letter he had sent six months ago: he had gone to Rio in search of Josué's mother and the son he has never seen. The brothers realise he too must be dead. The next morning, while Josué sleeps, Dora takes the bus for Rio. Josué wakes up too late to prevent her departure. Both are left with a photo by which to remember one another.


(Over 1,500 boys auditioned for the role of Josué. The winner, Vinícius de Oliveira, was a shoe-shine boy.The movie was shot entirely in the sequence of its script.
When Fernanda Montenegro set up her table at Central do Brasil, real people (who didn't recognize her) approached her to write letters for them. Some of these real requests were incorporated in the film by Salles.)
posted by COCHIN FILM SOCIETY No comments: