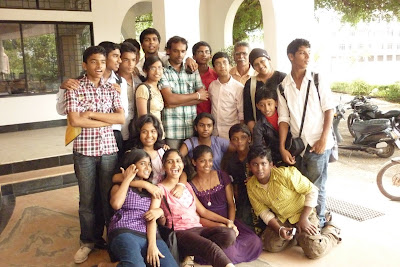 A one month long film camp was organized by Cochin Film Society at Rajagiri Public School as part of their vacation camp." The call", 5 minute long short film , produced by the students attended the camp, received laud applause.
posted by COCHIN FILM SOCIETY No comments: 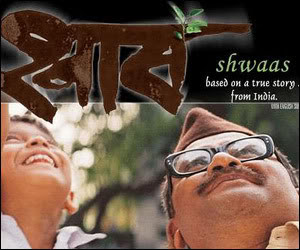 An old villager (Vichare) brings his 8 year old grandson Parshuraam (also known as Paarsha) to a doctor in Mumbai to diagnose the child's eyes. They are accompanied by child's maternal uncle Diwarkar. On the first day Vichare is asked to sign usual papers before admission in hospital. Upon asking, he learns that the papers say the doctor would not be responsible if anything goes wrong. Vichare, the rustic grandfather finds these terms unacceptable. A medical social worker named Asawari who is present there, quickly comes in and explains the practice to Vichare. She calms down Vichare and accompanies them during the first appointment with the doctor. Dr. Sane quickly diagnoses child as a victim of the rare retinoblastoma - a rare retinal cancer. After consulting with other colleagues in US and UK doctor finds that only way to save child's life is to perform an operation that will leave the child blind. As per rule, doctor explains this and insists child be informed of this before surgery. He cannot be operated without this knowledge as it was against ethics. Asawari (Amruta Subhash) who helps the doctor in convincing the grandfather and the grandson, tries to keep track of Vichare and persuades him not fall prey to other doctors promising false medicines. She tries to befriend Parshya in order to explain him what is going to happen. However, she finds it is too difficult to explain to him that he will turn blind.

The film then depicts the grandfather's struggle to accept the reality that the only way to save his grandson is at the cost of his eyesight. He tries various ways to come to terms with the situation and his personal agony is shown in scenes, like taking second opinion, explaining his grandson the reality and his desire to show him everything possible before his grandson loses his eyesight. For some reason, the surgery has to be postponed by a day. That afternoon, grandfather and grandson disappear from the hospital ward and a frantic search follows. Confronted by an angry surgeon on their return, the grandfather states quite simply that he wanted to show Parshya the sights of the city for one last time.

The film has been applauded for scenes which depict the difficulty faced by the doctors to explain to grandfather and Parshya that nothing can be done and the truth is but inevitable. It shows the medical fraternity in a very positive light, with the doctors and nurses being extremely supportive and doing the best they can, and helping the village with the best facilities. The last shot where Parshya returns home wearing dark glasses, waving to his family and friends from the boat was widely appreciated by film critics

The film received numerous awards at both national and state level. It won the Maharashtra State Film Award and then India's highest National Film Award, bringing the coveted Golden Lotus to Marathi cinema for the first time since 1954. Ashwin Chitale won the best child artist award. The film was India's official entry to the Academy Award for Best Foreign Language Film in 77th Academy Awards (the Oscar Awards), 2004. 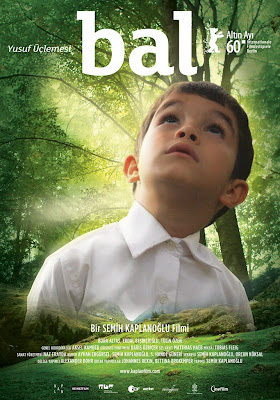 Bal was the winner of the 60th Berlinale in 2010. What the jury saw in this film by Turkish director Semih Kaplanoglu was a poetic exploration of childhood in rural Turkey, told by images and sounds capturing the pure nature of it surroundings without any artificial interventions.

Yusuf is a boy living with his parents in the forest in the country side of Turkey. He has trouble at school where he spends his recess time alone and he has a close relationship with his father, a beekeeper whose job is to collect honey in dangerous tall trees. Yusuf accompanies his father in this tasks until some plague has scared the bees away and Yusuf´s father must look for the honey somewhere else. During this time Yusuf is left alone with his mother, but she fails to connect with his own boy. When Yusuf´s father is gone missing from his honey seeking trek, they depart to look for him without success.

The story is told in a very slow, passive and patient rhythm, relying solely on the inner conflicts of its characters without following any contrived plot. There is no music score and the dialogue is stripped down to the minimum. The soundtrack is provided by sounds of birds, wind blowing, trees, fire cracking and other natural sounds. We are witnesses of the routine of rural Turkey and their customs and we connect to Yusuf in an intimate way by coming into his quiet, simple and unspoiled world.

This is not a movie for the masses, there is no action, dramatic structure, music, effects, sex or any other element we can found in modern films. This is a movie for the patient, for the reflective, the curious and unrushed. The one who will connect to the stunning beauty of the landscapes portrayed by Baris Ozbicer´s beautiful cinematography.