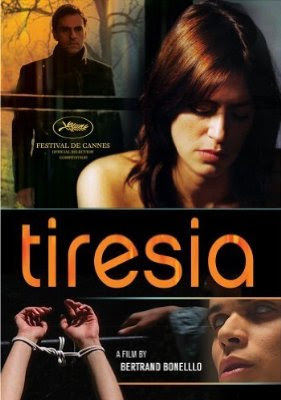 The story of Tiresia is part of Greek mythology. During his life, Tiresia was both a man and a woman. Blinded by the rage of a goddess, the gods granted him higher vision. Our story takes place in our day.
Tiresia, a Brazilian transsexual of extreme beauty, lives illegally with her brother in the outskirts of Paris.
Terranova, an aesthete with poetic ideas, likens Tiresia to a perfect rose. He ends up kidnapping her to keep her as his own. Deprived of her daily hormones, Tiresia transforms little by little before his eyes.
Powerless before what his rose becomes, Terranova blinds Tiresia and leaves her for dead in the countryside.
In a pitiful state between woman and man, Tiresia is taken in and cared for by Anna, a simple young girl. While recuperating, Tiresia discovers a sudden gift of premonition. But the presence of an oracle disturbs the Church. The parish priest has no choice but to confront Tiresia.
posted by COCHIN FILM SOCIETY No comments: