ONE CLASSIC MOVIE AND A PRD DOCUMENTARY
WILL BE SCREENED EVERY FRIDAY 5.30 PM
AT CHILDRENS PARK THEATER.

ENTRY WILL BE RESTRICTED TO  DELEGATES. 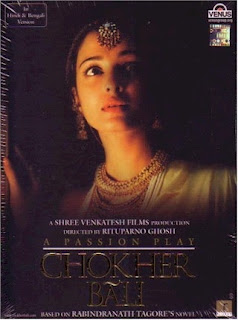 Chokher Bali (literally translated to "sand in the eye", figuratively to "constant irritant"; Bengali: চোখের বালি) is a Bengali film based on the novel Chokher Bali by Rabindranath Tagore. It was directed by Rituparno Ghosh in 2003 and stars Prasenjit as Mahendra, Aishwarya Rai as Binodini and Raima Sen as Ashalata. Ashalata and Binodini refer to each other as Chokher Bali. The other major characters are played by Lily Chakravarty (as Rajlakshmi, Mahendra's mother) and Tota Roy Chowdhury (as Behari, Rajlakshmi's adopted son). The film was later dubbed into Hindi and was released internationally under that language.

Upon release, Chokher Bali met with positive critical and box office reception.
Chokher Bali won the National Film Award for Best Feature Film in Bengali and was nominated for the Golden Leopard (Best Film) award at the Locarno International Film Festival in 2003. The film screened at the 34th International Film Festival of India on October 19. It was the Official Selection at the Chicago International Film Festival in 2003 and was showcased in over 25 international festivals including the Toronto International Film Festival,[6] London Film Festival, Palm Springs, Karlovy Vary and Washington DC International Film Festival besides winning the Apsara Film Producers' Award for the Best Regional Film 2004. Aishwarya Rai had won the Best Actress for the film at the Anandalok Awards 2003.
Plot
Binodini is a young woman who is left to her own devices when her sickly husband dies soon after they are married. She returns to her village and lives there for a couple of months until she sees one of her relatives passing by. Binodini hails the woman and the two soon agree that it would be best if Binodini came to live with the woman and her son, Mahendra. (Mahendra was one of the first to see Binodini's photo when she was unwed yet refused her on account of his being "unready for marriage.") When the two arrive, the woman's son and his new bride are constantly sneaking off to be alone together. This infatuation does not last long, and Mahendra soon begins to see that his wife's friend, Binodini, is more his type. The story details the lives of these three and Mahendra's best friend as they deal with issues as distrust, adultery, lies, and fallings-out