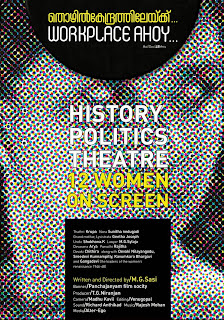 "Thozhil Kendrathilekku"
a documentary based on a play of the same title that
broke new ground in Malayalam,
will be screened
at
Children’s Park  Theater, Ernakulam
on
30th September 2013, Monday,  6 pm.

The play was written and enacted by the very first women’s collective in Malayalam theatre. M. G. Sasi, director of the documentary, said the theme of the play had contemporary relevance.
‘Thozhil Kendrathilekku’ triggered social reform in the Namboodiri community in the 1940s.
At a meeting of Antharjana Samajam, the women’s wing of the Yogakshema Sabha, held in 1944, expressed a strong desire to work and stand on their own feet.
In 1947, E.M.S. Namboodiripad inaugurated a women’s collective, Thozhil Kendram, at Lakkidi Cherumangalathu Mana. The collective had 16 members.
The Kendram gave basic education to members along with training in stitching, weaving and cooking. ‘Thozhil Kendrathilekku’, one of the first feminist plays in Malayalam, was a reaction of oppressed women in the Namboodiri community against gender inequalities.
The script was based on the life of Kavunkara Bhargavi, who was rescued by activists of Antharjana Samajam when she was forced to marry against her wish.
The documentary does not depict the play and its historical context directly, but borrows from other sources to drive home its message.
Scenes from Aristophanes’ play ‘Lysistrata’, a comic account of a woman’s mission to end the Peloponnesian War, have been included.
‘Lysistrata’ persuades the women of Greece to deprive their husbands and lovers of sexual privileges as a means of forcing them to negotiate peace. The strategy, however, triggers a battle between the sexes.
Scenes from Ibsen’s ‘A Doll’s House’ too have been included. Nora, its heroine, is expected to look beautiful, look after her home and satisfy her husband’s needs. But she does not want to be chained to the traditional roles women are expected to don. Ibsen depicts her attempts to articulate her own desires and needs.
The documentary also re-creates episodes from Kuriyedathu Thathri’s life. History records Thathri as a bold, beautiful, scholarly and fun-loving Namboodiri woman who questioned ills in her community.
The screening will be followed by an   interactive session
http://www.youtube.com/watch?v=E1rJqf29LNI