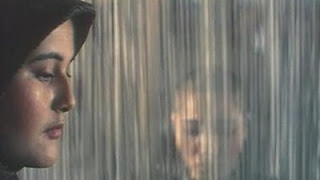 Writer: /Director: Maryam Shahriar
Cast : Altinay Ghelich Taghani,Soghra Karimi,Zahra Mohammadi,Habib Haddad
The Iranian film Daughters of the Sun (Dakhtaran-e Khorshid), directed by Maryam Shahriar, pictures the poverty of the rural countryside, where desperate families send their illiterate daughters to a small-scale rug factory in order to gain remittances from their wages while they live in virtual slavery. They are cruelly punished for accidents rather than treated medically; mail is kept from them, and they are unable to leave the factory, where they are locked up at night or otherwise kept under almost constant surveillance with meager rations. When the film begins, Amangol (played by Altinay Ghelich Taghani) is having her head shaved in preparation for her assignment to a factory. Without hair, she appears to be male (presumably to get higher wages for the poor family) and thus does not wear the customary head covering. Because she is an excellent weaver and a male, she is placed in charge of all the female workers but punished when they weave inferior products. None of the workers is happy; all want to escape. The scene of a horse liberating itself by running away from a master is the principal paradigm of the film. Bibigo leaves when married to someone whom her family chooses, with presumably another life of harsh servitude ahead. Belghies's uncle committed her to the factory after the rest of her family died during an earthquake in Tiva. In due course Belghies begs Aman to return to Tiva as her husband, but the latter declines. there is only one scene where mutual lust can be inferred from facial expressions. Finally, Aman decides that the only way out is to burn down the factory, including herself. Daughters of the Sun is a slow-moving film presenting the thesis that women should be better treated in Iran. But women will have to act on their own behalf to produce any change, as the men in the film are beasts. Love scenes were cut from the movie at the last minute to gain release from the Iranian censors. With opaque subplots, the filmviewer may find Daughters of the Sun to be almost a silent film; the power of the message is in facial expressions and scenes of brutality and poverty more than in words. (PFS Film Review)