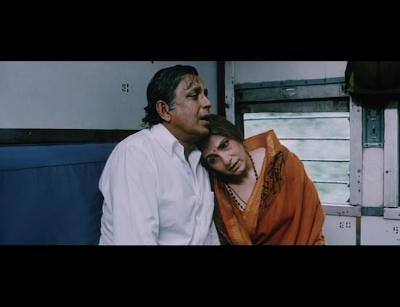 Retired station master Hari Singh’s wife of 40 years has just died .His son is abroad and his brash teenage granddaughter is growing up in midst of studies, friends and first love.

And then arrives a letter from .

was Hari’s first love, he had last met her when they were in school. This letter invited him back to his high school reunion and to , who is still the same sweet, lyrical girl he knew. She is a painter, unmarried and lives in the same town where their love blossomed, guilt clutches at his heart when he learns about this. He had built a family, while she had built a castle of empty dreams from memories of past.

Hari returns to his home town after attending the reunion but he and keep a steady stream of letters between them which gets them even closer. These letters are caught by his granddaughter and he is worried that if his daughter-in-law discovers this, her sense of social priorities is bound to cause an upheaval. Ganga’s letters stop coming, a worried Hari with his understanding granddaughter’s help, returns to ’s town and finds that she is battling a disease and her uterus has been removed.

about Ganga .Hari is cornered and shamed by her rebuke and promises not to be in touch with no matter what.

What happens next forms the rest of the story……..

(THE PROGRAMME FOLLOWED BY AN INTERACTION WITH THE DIRECTOR)

-ADMISSION FREE AND OPEN TO ALL-