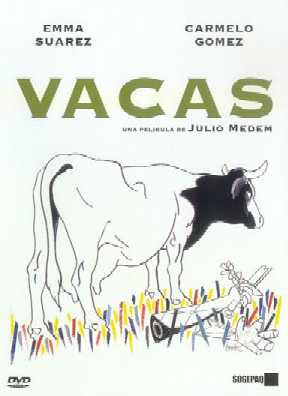 The political and social climate of the Basque country of Spain is constantly in flux, yet the cows of the region are steadfast and calm, observing the unusual changing human culture without reaction. This is one of the themes of Julio Medem's (LOVERS OF THE ARCTIC CIRCLE) insightful film about the insecure government and often frightening living situation in Spain. It was Médem's first film and he won the 1993 Goya Award as Best New Director.

Plot
Fighting in the trenches at Biscay in 1875 during the Third Carlist War, Carmelo Mendiluze, an army sergeant, learns from a young errand boy named Ilegorri that Manuel Iriguíbel, his neighbor from his native village, has joined their exhausted battalion. Eager for news of his child's birth, Carmelo befriends the inexperienced soldier whose reputation as an expert aizcolari (competition log cutter) cannot conceal his apprehension and fear of armed combat. Panicking under fire, Manuel drops to the ground and smears himself with blood gushing hot from the neck of his mortally wounded neighbor, Mendiluze. When the battle is over, Manuel crawls out from a cartload of the dead, naked bodies as he is transported away from the front lines. Nobody has seen his escape, except a curious, solitary cow.

Thirty years later, in 1905 in rural Guipúzcoa, a lingering animosity has continued between the Mendiluze and Iriguíbel families. Manuel, now an old man, is still regarded as a coward; he spends his time painting the family’s cows watched over by his three granddaughters, the offspring of his son Ignacio Iriguíbel and his wife Madalen. Ignacio and Carmelo's son, Juan Mendiluze, have maintained family traditions by honing their skills as aizcolari. Despite the strained relations between the neighbors, the destinies of the two families are fatefully interconnected. Juan's sister, Catalina, cannot conceal her romantic interest for Ignacio as she furtively watches him practice cutting logs in the woods - an attraction that proves to be mutual through Ignacio's playful attempts to catch her already piqued attention. Paulina, the Mendiluze widow, warns her daughter that her interest for Ignacio Iriguíbel will bring the downfall of the Mendiluze family. In an attempt to capitalize from the rivalry between the two families, Ilegorri, now a grown man, arranges a waged competition between Ignacio and Juan. Ignacio wins and his career as an aizcolari contender is launched. Catalina and Ignacio start a secret affair.

Ten years later, in the spring of 1915, Ignacio comes back home after being traveling to national competitions. He now enjoys fame and success. Although Ignacio takes cares of his family farm, he neglects Madalen, his wife. He is promptly reunited with Catalina, and they have a ten-year old son. After the death of their mother, the relationship between the bitter Juan and Catalina is increasingly strained. Juan, still a bachelor, is more obsessed and delusional in his incestuous feelings for his sister. Catalina, afraid of him, wants to escape to America with Ignacio. A close childhood friendship develops between Peru, Catalina and Ignacio's ten-year-old illegitimate son, and his half-sister Cristina; they wander amidst the mountain forest under the supervision of their limp and old grandfather, Manuel. Eventually the boy's parents elope to America and take him with them.

In the summer of 1936, Peru has left his family behind, coming back to Guipúzca, as a photojournalist reporting on the Spanish Civil War. The Mendiluze farmhouse is empty. Juan, his uncle, has put on his Carlist red beret, joining the Nationalists. Peru is reunited with Cristina, his half-sister and childhood sweetheart. He stays at the Iriguíbel’s farm. Cristina has had a relationship with Lucas, Iligorri’s son. She shows Peru the last paintings made by their grandfather. The Spanish Civil War comes to the village. The men try to find refuge in the forest when the Nationalists come. Peru and Crisitna follow them and are joined by Lucas, who offers to protect them. Lucas is killed and Peru is captured with the surviving men of the region. The men are executed but Peru is spared thanks to the intervention of Juan who recognizes him as his nephew. Reunited with Cristina, Peru and Cristina flee to the French frontier.

Born in San Sebastián, in northern Spain, in 1958. Still a teenager he made some short movies in a super-8 camera owned by his father. Some of those movies where "El ciego" (1976), "El jueves pasado" (1977) and "Fideos" (1979). At the same time, and willing to know more about the darkests corners of the human mind, he studied psychiatry. In 1985 he got a degree in medicine in the university of the Basque Country. By that time he has become a collaborator specialized in cinema in differents newspapers and magazines like "La voz de Euskadi", "Casablanca" and "Cinema 2000". In 1986, he directed a short in 35 mm titled "Patas en la cabeza" that won an award in the international Festival of Bilbao. In 1987, after winning the Telenorte prize for another short movie, "Las seis en punta", he decided to become a professional filmmaker. He worked as assistant, editor and screenwriter in differents projects for cinema and TV. He also wrote several screenplays but they were all refused by most of production companies. Finally, in 1991, when he was desesperate for not being able to make movies, he received a call from a new production company called SOGETEL. They were interested in one of his stories titled "Vacas" about the fight of two families along three generations, from 1875 till 1936. Released in 1992 it became a big success. It won the Goya of the Spanish academy for best new director and prizes in the festivals of Tokyo, Torino and Alexandria. In 1993, he made a second movie, "La ardilla roja" confirmed his talent and also won prizes in Fort Lauderdale, Bogotá and Bucarest. His third movie, "Tierra" released in 1996, was selected for the Cannes Film Festival, the most important in the world.

In 1998 he released "Los amantes del Círculo Polar" considered his best movie by most of his fans. It also became a box-office hit with more than one million spectators in Spain. The film was also released abroad. In 2001, his fourth movie, "Lucía y el sexo", also became a huge hit and discovered actress Paz Vega who won the Goya of the Spanish academy for best new actress.

2003 was a difficult year for Medem. The release of "La pelota vasca", a documentary that portrays the phenomenon of nationalism in the Basque Country, in northern Spain, was very polemical. Actually, Medem is one of the most importants and original spanish filmmakers
posted by COCHIN FILM SOCIETY No comments: 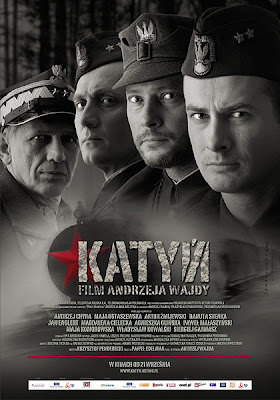 Director: Andrzej Wajda
Editing by:Milenia Fiedler,Rafał Listopad
Music by: Krzysztof Penderecki
Cinematography: Paweł Edelman
Written by: Andrzej Mularczyk (novel),Andrzej Wajda,Przemysław Nowakowski Cast : Artur Zmijewski ,Maja Ostaszewska, Andrzej , Danuta Stenka , Jan Englert , Magdalena Cielecka , Agnieszka Glinska ,Paweł Małaszyński
Katyń is a 2007 Polish film about the Katyn massacre, directed by Academy Honorary Award winner Andrzej Wajda. It is based on the book Post Mortem - the Story of Katyn by Andrzej Mularczyk.
Filming began on October 3, 2006, and ended on January 9, 2007. The film premiered on September 17, 2007, the anniversary of the Soviet invasion of Poland in 1939. The movie is regarded by some as the most important and most awaited of Wajda's projects
It was nominated for Best Foreign Language Film for the 80th Academy Awards.
The Katyn massacre, also known as the zbrodnia katyńska ('Katyń crime'), was a mass execution of Polish POW officers and citizens ordered by the Soviet authorities in 1940. The most widely accepted estimate of the dead is about 22,000. The victims were murdered in the Katyn forest, Kalinin (Tver) and Kharkiv prisons, and elsewhere. About 8,000 were officers taken prisoner during the Soviet 1939 invasion of Poland, the rest being Poles arrested for allegedly being "intelligence agents, gendarmes, spies, saboteurs, landowners, factory owners, lawyers, priests, and officials."
For several decades the truth about the event was suppressed by the Soviet authorities, who maintained an official line throughout the Eastern Bloc that the massacre was committed by the Nazis. With the fall of communism in Poland in 1989 the truth of Katyn saw the public light of day, with the first non-communist Polish government immediately acknowledging that the crime was committed by the Soviets. In 1990, the USSR authorities admitted for the first time that the crime was committed by the Soviet NKVD. Two years later Boris Yeltsin officially declared that it had happened by the order of Joseph Stalin himself
There are now some cemeteries of Polish officers in the vicinity of the massacres, but many facts of the event remain undisclosed to this day and many graves of the Polish POWs east of the Bug River are either still unmarked or in a state of disrepair.
The director's father died in this massacre. Andrzej Wajda was only 13 years old. His father's remains were never found.
posted by COCHIN FILM SOCIETY No comments: