Cochin Film Society is conducting a Script Writing Workshop
from May 15 to 17 at Ernakulam.
The Workshop will be led by
Prof. C.S. Jayaram,
artist, art writer and
member of Kerala Lalithakala Academy.
Prof. Jayaram is also a Visiting Faculty of leading film Schools in Kerala.
The course fee is Rs 700 and
is inclusive of lunch on all three days. Those who are interested in participating may contact any of the following numbers. As there are only limited seats, registration has to be done on or before May 13. Ph: 2378795 Mob: 9388602724, 9447414433.

‘Satyricon,’ (‘Fellini Satyricon’) is a 1969 Italian film by Federico Fellini. It is loosely based on the Petronius novel Satyricon, a series of bawdy and satirical episodes written during the reign of the emperor Nero and set in imperial Rome.

Petronius's original text survives only in fragments. While recuperating from a debilitating illness in 1967, Fellini reread Petronius and was fascinated by the missing parts, the large gaps between one episode and the next. The text's fragmentary nature encouraged him to go beyond the traditional approach of recreating the past in film: the key to a visionary cinematic adaptation lay in narrative techniques of the dream state that exploited the dream's imminent qualities of mystery, enigma, immorality, outlandishness, and contradiction.

Though the two protagonists, Encolpius (Martin Potter) and Ascilto (Hiram Keller), reappear throughout, the characters and locations surrounding them change unexpectedly. This intentional technique of fragmentation conveys Fellini's view of both the original text and the nature of history itself, and is echoed visually in the film's final shot of a ruined villa whose walls, painted with frescoes of the scenes we have just seen, are crumbling, fading and incomplete. Fellini's interest in Carl Jung's theory of the collective unconscious is also on display with an abundance of archetypes in highly dreamlike settings.

A year prior to the release of the film another ‘Satyricon,’ film (directed by Gian Luigi Polidoro) was already released, hence the addition of "Fellini" to the title.

Script & Direction : Madhu Eravankara
Synopsis
Sex-work is not a sin. For many it is just like another profession. But they live as outcasts and naturally end up in streets. In Moovattupuzha, a small Municipal town in Central Kerala, an organization, Swaruma, took initiative to mobilize sex workers primarily to make them aware of AIDS. As they worked together, some of them felt the need to give up their despised present and rewrite a life anew. Moovattupuzha Municipality rose to the occasion and helped them with a laundry unit set up in the Taluk Hospital. At least ten of them formed a group and got along with the project to eke out a living. To augment their meager income the Municipality came forward again to offer them a unit as part of Clean Kerala Project. It was a metamorphosis for them as now they earned their bread through their dignified toil.
'Punarakhyanam,' ( The Retelling ) portrays the story of triumph of these empowered women , who melted into mainstream regaining the lost glory of womanhood.
Credits
Script& Direction. MADHU ERAVANKARA
Produced by MAGIC LANTERN
Co-production THOMAS DAVID (USA ) JOHNS ( KSA)
Cinematography M.J.RADHAKRISHNAN Editing VIJAYAKUMAR
Music CHANDRAN PARIS Sound HARIKUMAR ( Chitranjali )

He has directed the feature film ‘Nankooram,’ and fifteen other documentaries including ‘Nishadam,’ (IFFK-2004, CFF-2004, DFF-2004 & BIFF- 2005) and ‘Victims of Silence,’ ( Eritrea ) that have received local and international acclaim. He is the recipient of President's Gold Medal & National Film Award (1999), State Film Awards ( 1999 & 2003) and Film Critics Awards ( 2000, 2002 & 2003). He has also been awarded a Senior Fellowship for Outstanding Artists, from the Indian Government’s Department of Culture, to research on Indian Literature and Cinema and a Fellowship from National Film Archive of India to research on Malayalam Literature and Cinema.

A regular contributor to the Malayalam Press as well as to National and International publications, Madhu Eravankara also serves as a Faculty in Film, in many of the State and National institutions.

Hailing from Eravankara in Alappuzha district, he is at present the Head of the Department of Chemistry at the Catholicate College, Pathanamthitta.
***
16.05.2008
7.00 PM
THE TIT AND THE MOON
/ Teta i la lluna, La (1994)
Director: Bigas Luna
Stars: Biel Durán, Mathilda May, Gérard Damon, Miguel Poveda, Laura Maña
Review
The Tit and the Moon is a 1994, Spanish /French film, directed by Bigas Luna.
For a movie with such a blatant mammary fixation, Bigas Luna’s fable surprisingly isn’t crass but charming. It’s the Catalonian director’s most engaging film, drawing upon his own childhood and personal symbolism. Little Tete (Biel Durán) is annoyed since a new baby brother means he can no longer suckle at his mother’s breast. He fixates upon amble-bosomed, new arrival Estrellita (Mathilda May), a ballet dancer with the travelling circus, and fantasises about her breasts squirting milk straight into his mouth. Tete’s pre-adolescent yearning for Estrellita is hindered by her marriage to Maurice (Gérard Damon), “the Flame King” with legendary farting prowess. Worse, Tete’s friend Miguel (Miguel Poveda) falls madly in love with her too.

A gentle, dreamlike story, beautifully shot in soft pink, blue and golden hues, the film tackles the delicate subject of a child’s burgeoning curiosity about sex. Its rambling, episodic narrative befits the daydreaming hero, with frequent bursts of playful fantasy: Tete imagining himself an astronaut, his dad as a Roman centurion, and women gleefully offering their breasts. The subject matter might trouble some, but Luna and his characters display tolerance and understanding. Luna continues his satirical swipes at Latin machismo. Indeed this is his most wide reaching satire of Catalonian culture. “Show some balls”, is Tete’s father’s constant refrain. The emphasis small town traditions place on masculinity is slyly sent up. For Luna overtly macho behaviour masks men’s powerlessness before feminine sexuality, driving their neurotic need to posses women utterly. Poor, lovelorn Miguel is a playful send-up of the Latin lover. He woos Estrellita with traditional love songs, competing with Maurice blasting records of Edith Piaf. A hilarious scene that becomes rather moving because Miguel Poveda (an accomplished singer) performs so sincerely.

Thankfully, Luna doesn’t reduce Estrellita to a pair of breasts. Though beloved by bad movie aficionados for her naked space vampire in Tobe Hooper’s Lifeforce (1985), this is Mathilda May’s finest performance. She touches each male character in different ways, captivating as lover, surrogate mother and spouse. Her ballet sequences (May is a classically trained dancer in real life), set to Nicola Piovani’s lovely score are magical highlights. Quirky in her own right, Estrellita is turned on by Maurice’s spectacular farts and collects men’s tears. Like Luis Buñuel, Luna accepts weird kinks as part of human nature. There is a touch of Federico Fellini about the provincial setting, cartoon characters and fantastical flourishes, but touching performances (including future director Laura Maña as Tete’s mother) and generosity of spirit prevent them becoming simple grotesques.

The moon represents desire, love’s young dream, something to reach for, to spur you on towards maturity. In the end it’s love, pure and simple, that everyone yearns for and each character finds some aspect of it by the fadeout. It says something about Luna’s humanity and makes this strange, funny, enlightening fable a wholly beguiling experience.
(Reviewer: Andrew Pragasam)
***
17.05.2008
6.30 PM
BLACK CAT, WHITE CAT.
Directed by Emir Kusturica
Written by Emir Kusturica, Gordan Mihić
Starring Bajram Severdžan,Srđan Todorović,Florijan Ajdini,Branka Katić
Music by Nele Karajlić, Voja Aralica,Dejo Sparavalo
Cinematography Thierry Abrogate
Editing by Sveltely Zach
Running time 135 min
Country France/ Germany/ Yugoslavia
Language Romany/Bulgarian/German//Serbian/Italian
‘Black Cat, White Cat,’ is a Yugoslavian Romantic comedy film directed by Emir Kusturica in 1998. It won the Silver Lion for best direction at the Venice Film Festival.

The literal translation of the title is actually ‘Black cat, white tomcat.’ The movie characters speak in Romani, Serbian and Bulgarian - frequently switching between them.

Synopsis: Matko is a small time hustler, living by the Danube with his 17 year old son Zare. After a failed business deal he owes money to the much more successful gangster Dadan. Dadan has a sister, Afrodita, that he desperately wants to see get married so they strike a deal: Zare is to marry her. But none of the two care much for an arranged marriage: Zare is in love with Ida, Afrodita is waiting for the man of her dreams…
posted by COCHIN FILM SOCIETY No comments: 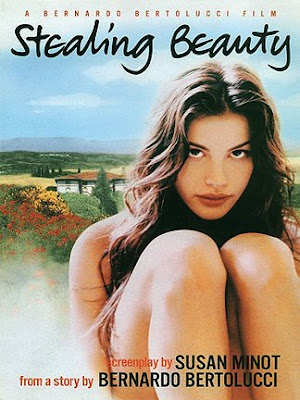 118 min /Italy France UK
Director:Bernardo Bertolucci
Writers:Bernardo Bertolucci (story)Susan Minot (writer)
Cast : Carlo Cecchi , Sinéad Cusack , Joseph Fiennes , Jason Flemyng
Anna-Maria Gherardi , Jeremy Irons ...
Lucy Harmon is a 19-year old American girl who is the daughter of poet Sara Harmon. After Sara commits suicide, Lucy travels to Italty and visits her mother's friends, Diana and her husband, Irish artist Ian, where Lucy wants a picture of her painted. Lucy decided to return to Italy to reunite with Nicolo Donati, a Italian boy she once fell in love with four years ago, when she last visited Italy. But reuniting with Nicolo isn't the only reason why Lucy decided to return to Italy, Lucy is on a personal journey, as she sets out to solve a mystery in her Mother's diary and discover who her father is who conceived her 20 years ago. Lucy's journey leads her to befriend Alex, a play-writer who is dying of cancer whom Lucy thinks may be her father or her father could be the artist who makes statutes from trees and sets out to loose her virginity as Diana and her daughter Miranda's boyfriend Richard become intrigued by her.
posted by COCHIN FILM SOCIETY No comments: