Cochin Film Society originated from the occasional film screenings held at Kerala Kalapeetom, Kochi, for a small but enthusiastic audience. 'Pather Panchali' was the first film screened. The artist T. Kaladharan, Honourary Secretary of Kerala Kalapeetom and a bunch of film lovers felt the need to take the film shows to a larger audience. Thus the Cochin Film Society took shape.

The Society was formally inaugurated on 24-5-1984 by the eminent cinematographer Mankata Ravi Varma. The last two decades of the Society’s functioning is dotted with many a landmark. Hundreds of good films from all over the world have been screened; many film festivals held. Film Appreciation Workshops, Seminars,Discussions and many such events are regular features. The Cochin International Film Festival was started in 2004. The 2nd edition of the Festival was held in October-November 2005.
posted by COCHIN FILM SOCIETY No comments:

Workshop on Film Theory and Principles of Composition

Film is perhaps the most exemplary art form of contemporary culture. As in the case of any art form, the praxis is accompanied by critical theorisation whose history forms the basis of film studies. But the mass appreciation of cinema is very often limited to passive viewing. Even film societies that promote good cinema are often not very enthusiastic about film theory.

It is in these circumstances that Cochin Film Society, a pioneer organization for the promotion of good cinema, has decided to organise a two-day workshop on film theory on July 21 and 22, 2007.

The workshop is designed with a view to familiarize students with the history of film studies. It will discuss the theories of Montage, Mise-en-scene, the ideology of Deep Focus Photography, the Apparatus Theory, Film Noir, the concept of Scopophilia, and will include various movements such as Neorealism, Expressionism and Surrealism.

The Workshop will also include a discussion of the Principles of Composition, relating painting, photography and cinema, discussing the various aspects of composition such as space, perspective, scaling, texture, lines of direction, gestalt, and colour.

The Workshop is intended mainly for media students, and the Registration Fee for the Workshop is Rs. 700/-, which includes lunch on both days.

The number of delegates is restricted to 30. 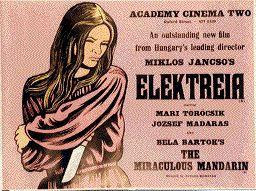 IN ASSOCIATION WITH NATIONAL FILM ARCHIVE OF INDIA, PUNE,

Fifteen years after the murder of her father, King Agamemnon, Elektra still cherishes the belief that her exiled brother Orestes will return to assassinate the murderer, the tyrant Aegisthus. On the anniversary of Agamemnon’s death, Aegisthus orders his oppressed people to celebrate and announces Orestes’s death; but the body he displays is not Orestes'. Then a messenger arrives with news of Orestes’ actual death; Aegisthus exalts, and Elektra bitterly strikes down the messenger. But the latter rises from the dead, revealed as Orestes himself. The people rebel and turn on Aegisthus, making him their plaything. Orestes kills the tyrant’s two chief courtiers, and then Aegisthus himself. He and Elektra recognise that their role is to die and to be continually reborn like the phoenix, which they identify with the red firebird of revolution.

In this film, which was the Hungarian entry at Cannes, 1975, Jancso has produced a Summing Up, a comprehensive synthesis of the particular genre he has created: an extraordinarily suggestive blend of ballet, the musical and the “happenings” that expresses his attitudes towards socio-philosophical problems.

Most movies are composed of many small snippets of film which are spliced together, connected by "wipes," and "dissolves" and any number of other clever techniques which move the eye (and the story) from one piece of film to the next without being too obtrusive. Renowned Hungarian director Miklos Jancso has instead shot this film recounting the classical story of Electra's revenge in about nine “long takes." This is a technical feat of some magnitude; it is all the more remarkable because he makes it seem perfectly natural to the story, which is told in an allegorical and highly symbolic fashion, mixing primitive Greek settings with modern ones. In it, the woman Electra seeks vengeance for the murder of her father. Due to the highly abstract form of storytelling used, this film might best be appreciated by those who have studied or have knowledge of the original Greek myth on which it is based.


Miklós Jancsó
A key figure in the development of the new Hungarian cinema, filmmaker Miklós Jancsó earned international recognition for his films 'Szegénylegények,' (The Round-Up, 1965), 'Csillagosok Katonák,' (The Red and the White, 1967), and 'Csend és Kiáltás,' (Silence and Cry, 1968).
These films best reflect Jancsó's tendency toward abstraction and contain a distinctive combination of revolutionary viewpoints and highly structured, formal cinematic style. Imagery is more important than dialogue, which is used sparingly to encourage audiences to contemplate Jancsó's underlying messages. The director tends to place actors in geometric patterns that mirror the landscapes around them.
Born in Vac, Hungary, Jancsó studied ethnography and art history while earning his law degree in 1944. He spent several years in Transylvania doing ethnographic research before enrolling in Budapest's Academy of Dramatic and Film Art, where he graduated in 1950.
Jancsó began filming numerous newsreels and documentary shorts until 1958, when he made his feature debut with 'A Harangok Rómába Mentek,' (The Bells Have Gone to Rome, 1958). The film is one of the few in Jancsó's repertoire that does not reflect his signature style. In 1963, he earned international acclaim for his medical drama, 'Oldás és kötés,' (Cantata, 1963).
Many of Jancsó's films examine the terrible aftermath of war. Although his first films offered sympathetic explorations of the human characters, his later works became increasingly concerned with the use of imagery for its own sake. Jancsó's landmark films of the '60s won many international awards and special recognition at the Cannes Film Festival. In 1972, he again earned international acclaim and the Best Director Award at Cannes for Red Psalm.
'Elektreia,' (Szerelmem, Elektra, 1974) consists of just 12 shots in a film lasting 70 minutes. Five years later, Jancsó won a lifetime achievement award from the prestigious French film festival. He continued to make films throughout the rest of the century, earning particular acclaim for a number of increasingly enigmatic works, including 'Szeressuk Egymast Gyrekek...A Nagy Agyhalal,' (Let's Love One Another...The Great Brain Death, 1996) and 'Nekem Lampast Adott Kezembe Az Ur Pesten,' (The Lord's Lantern in Budapest, 1999).
posted by COCHIN FILM SOCIETY No comments:

The story of neglected and disregarded Old Age is not new for Malayalam cinema. From Padmarajan’s ‘Thinkalazhcha Nalla Divasam,’ to Jayaraj’s ‘Karunam,’ the theme has been told many times over. The aged parents left to languish alone in their homes even as the sons and daughters migrate in search of better pastures with the threat of an ‘Old Age Home,’ looming darkly before them and the insensitivity of the younger generations towards the sentimental yearnings of the elderly people have provided enough to fire up the imaginations of many directors.

Though the lonely parents of rich non-resident Keralites is often given the tab of Kerala’s latest social malaise, this syndrome is particularly on the rise in certain parts of the State, especially in the Pathanamthitta and Kottayam districts, where a considerable number of the young generation has been consistently migrating to foreign pastures. Take the case of Thiruvalla, where, according to some informal estimates, at least one member of every family is aboard.

Perhaps this is what prompted Friends of Thiruvalla, the Doha-based socio-cultural organisation, to support their townsman Babu Thiruvalla in his maiden directorial venture, ‘Thaniye,’ (Alone). With Nedumudi Venu in the lead role, the film tells the story of Georgekutty, an ageing planter spending his old age alone in his sprawling bungalow among his estates in the High Ranges.

One major bane of Malayalam movies dealing with the theme of neglected old age is the proximity to slip into maudlin sentiments and uncontrolled pathos, with weeping sessions lasting several minutes sprinkled liberally throughout the film. However, ‘Thaniye,’ stands apart, with its overall restrained mood and compact tone.

The content, or story, in a nutshell is the usual one – the aged and sick widower left alone among his riches, only son having migrated to the US, greedy relatives and unfaithful servants hovering around waiting for his death, the entry of a kind and gentle home nurse who bring him back to health and the ensuing problems.

What gives a good experience of cinema from this not-so-novel theme is the subtle treatment, which does not plunge into pathos or remain unbearably grim.

Nedumudi Venu as the planter Georgekutty and Lakshmi Gopalaswami, in the role of the home nurse, presents some scintillating moments of acting. The supporting cast of KPAC Lalitha, Asokan, Mamukoya and others are also quite apt for the characters.

The tone of subtlety and discretion is maintained throughout the film. There is no unnecessary digging at the home nurse’s personal story, except for what is being revealed naturally through snatches of conversations. And there is no attempt to follow her, after the planter’s US-settled doctor-son dismisses her. The brusque, but polished manner in which he tells her to leave is also something hardly seen in Malayalam cinema. He even has a neatly wrapped and ribboned gift packet for her, in the typical American way. And there is not even a breath of the innuendos of gossip linking her with the old man that had sent him flying down from the US back home.

Though this is first directorial venture, Babu Thiruvalla is no new face for Malayalam cinema. He has produced a couple of good films, including ‘Oru Minnaminungite Nurunguvettam,’ ‘Amaram,’ and ‘Samagamam.’ He has also associated with the work of Jayaraj’s ‘Kannaki,’ as creative contributor.