Synopsis: Brazil, A View from Inside offers insightful observations of the country with powerful messages conveyed through stunning imagery and well chosen interviews. This work have succeeded in doing a quick-paced film with the book, 'From Inside Brazil' by Indian economist Vinod Thomas. By looking at everyday life in India and Brazil, it presents a unique view about the need for economic, social and environmental values to co-exist in the changing world we live in, the filmmakers unravel the country's promising prospects for global take-off. Whether you're a specialist on Brazil or simply a fan of anything Brazilian, this gem of a film by an Indian-Brazilian couple is an ideal warm-up before the 2014 World Cup and the 2016 Summer Olympics, going beyond the usual cliches.
Filmed in the Amazon, Rio De Janeiro, Brasilia, Paraná and India, this documentary provides the most timely and insightful guide to current Brazil. The film extensively covers scenes of Brazil’s communities and lifestyle with in-depth interviews that give viewers a refreshingly personal take on development issues. The account vividly captures images of rich cultural contexts and natural resources, with messages that are of great relevance to the world. The documentary also highlights the relevance of unfolding stories about Brazil and India, with key parallels between these countries that represent global and developing economies headed toward critical crossroads, effects of climate change, and growth that calls for more inclusion. In the global scenario, revelations on the role of diversity, education and environment in the emerging country!
DIRECTORS : 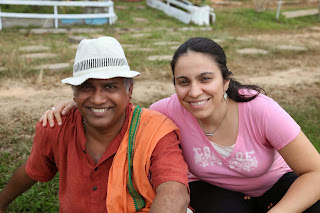 Ananda Jyothi:  Ananda Jyothi is director and musician, born in Kerala, South India, lived in Brazil for 14 years. Directed several documentaries throughout his career, among them: Planet India (2011), India Devi Divine (2007), Mudra: Magic of Music and Dance of India (2012), Mantra Tropical (2010), and the latest Brazil a View from Inside (2013). He is the founder of Tantri Art and Culture, the production company that promotes cultural cooperation between India and Brazil. In 2012 he was the curator of the largest exhibition of Indian cinema in Brazil, Bhava: Universe of Indian Cinema, in Brasília, Rio de Janeiro and São Paulo.

Carina Bini: Director, Writer :A Brazilian Carina Bini has a background in Communications - Journalism, is a writer, director, and executive producer. She is the Founder of Tantri Art and Culture, a producer company who works with cultural exchange. Author of fiction script La Mamma, awarded by Ancine (National Cinema Agency - Brazil) and Direzione Generale Per Il Cinema (DGC) and the Foundation for Experimental Cinematography Centre (CSC), Italy. Wrote and directed more than a dozen documentaries throughout her career. The movie "Brazil, a View from Inside" is her latest work. 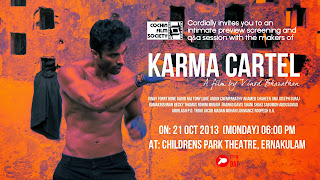 Synopsis:
Set in modern India, three life-changing days in the lives of an
actor and his friend, affected by the needs and greed of the urban
city they live in.
In a southern city of India, a reporters search for a missing actor,
leads to revelation of multiple lives connected to it through
greed and bad choices. The three last days before the incident
follows the struggling actor, an ambitious filmmaker, a
wannabe hustler, an opportunist, a lover and two cinephile
thugs, through an inter-twining vignette of their lives.
3 life-changing days of a couple of young
people in a fastmoving urban city of India

The Director
Vinod Bharathan was born in India, but
shifted base to Copenhagen in 2000. He
took up filmmaking career in 2008. He studied
film-making at prep-schools (Copenhagen
Media School, Rampen) to make his
way into the National Film School of Denmark.
Since the National film school of Denmark
denies stipend for non-European citizens,
he then formed an independent production
company by the name Fookdat
Productions. He made over 8 short films
which were screened at various film festivals
around the world.
Awards and Nominations
Best film : Limbo (Indiefone film festival
U.S.A. 2012 / Sony Mobile - Circuito Off,
Venice 2012)
Official selections: The Punishment
(Film Noir Foundation, U.S.A
2013 / Scandina- vian Film festival L.A. 2013)
Moose and sunset (Denver Film Society 2012)
Karma Code (International film
festival Ahmedabad, INDIA, Show Me Justice,
Texas, U.S.A. 2011)
Go figure (CPHPIX 2011)

Production Notes
The idea for KARMA CARTEL was formed
was as the director Vinod Bharathan was
getting offers from the film industry. He
learnt that the industry would strip him of
his artistic vision, and he decided that his
first film must not be financed by the industry.
He had been closely observing the lives of
his friends back in India every time he was
there for a short visit. He then formed a
plot based on these observation to create
the idea for KARMA CARTEL.
He armed himself with a professional HDVCAM
(A tool he loved using while at film
school) and an excel-chart of the shooting
plan and set on a journey to India.
No one in India believed him initially. But
as he was loosing days trying to convince
a team, his assistant director Sarath Balan
admitted that it would technically take 10
days to complete filming; but not practically.
This made Vinod Bharathan even more
adamant and wanted to complete the filming
in 10 days. After the first two days of
shooting, the team found out that it was a
plan worth fighting for.
Vinod Bharathan learned that he will have
to shoot the entire scenes on one-take, so
as to keep the audio in continuity. As they
were shooting guerrilla, they couldn’t afford
to stay at any single place for long periods of time.
The film ended having the most number of
single-takes, and one of the scenes has a
record length of 7minutes (The story telling scene by Q).
The filming was very hectic and exhausting
for the two member crew who, shot an average
of 6 scenes a day.
But Vinod Bharathan had broken down the
cast into several groups and made sure
they never worked more that 2 hours a day
by shooting their scenes randomly.
The initial filming ended on the 8th days
where Vinod had to return to Copenhagen.
The last two days of filming happened
when he returned to India again. He shot
then last two days single handedly, without
assistance from Sarath.

Directors Statement:
“Four years ago, when I came out of the
film school, I decided that I will make a full
feature when i know I’m ready for it. While
editing KARMA CURRENCY (my previous
short film), I could see that I was ready for
a full feature.
So, all I did was pack my bags with
clothes and supplies for three weeks, a
camera and a microphone, and flew down
to India to make a film - Karma Cartel.
The script to Karma Cartel was in my heart
and the direction of the film was in my
head, and had decided to film with whatever
means were available. I imposed as
much restrain as possible in the making of
KARMA CARTEL. At one point, I even considered
making the film following the
Dogme-95 manifesto, but gave it up, as it
too had its set of rules I didn't want to
obey.
What came out as final-cut was a film
multi-layered with subtext that seeped out
of my bottled up frustration that i had experienced
during my up-bringing as a progressive
thinking urban youth in a suppressive
third-world. The locations where the
filming took place has a significant attachment
to me. In a way, this film is a homage
to my hometown, Kochi.”
posted by COCHIN FILM SOCIETY No comments: