NO COUNTRY FOR OLDMEN 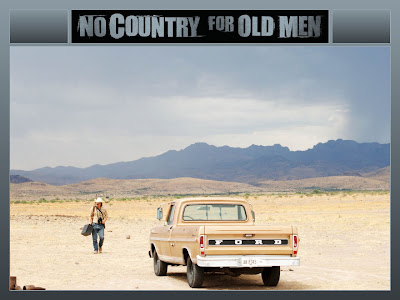 No Country for Old Men is a 2007 crime thriller film adapted for the screen and directed by Joel and Ethan Coen, and starring Tommy Lee Jones, Javier Bardem, and Josh Brolin. Adapted from the Cormac McCarthy novel of the same name No Country for Old Men tells the story of a botched drug deal and the ensuing cat-and-mouse drama, as three men crisscross each other's paths in the desert landscape of 1980 West Texas. The film examines the themes of fate and circumstance the Coen brothers have previously explored in Blood Simple and Fargo.
No Country for Old Men has been highly praised by critics. Roger Ebert of the Chicago Sun-Times called it "as good a film as the Coen brothers...have ever made." Guardian journalist John Patterson said the film proved "that the Coens' technical abilities, and their feel for a landscape-based Western classicism reminiscent of Anthony Mann and Sam Peckinpah, are matched by few living directors." The film was honored with numerous awards, garnering three British Academy of Film awards, two Golden Globes, and four Academy Awards for Best Picture, Best Director (Joel and Ethan Coen), Best Adapted Screenplay and Best Supporting Actor (Javier Bardem). 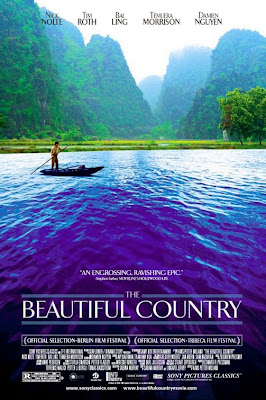 The Beautiful Country is a 2004 Vietnam-related drama film set in 1990. It is directed by Hans Petter Moland and starring Damien Nguyen, Nick Nolte, Bai Ling, Chau Thi Kim Xuan, Tim Roth, Anh Thu, Temuera Morrison and John Hussey. The screenplay was written by Sabina Murray, a writer who teaches at the University of Massachusetts, Amherst's MFA Program for Poets & Writers.


Plot summary
The film tells the story of a Binh, a "bui doi" Vietnamese boy (fathered by an American soldier during the Vietnam War). After a life of prejudice and servitude, Binh decides to leave his tiny Vietnamese village and search for his mother in Saigon. Binh finds his mother, Mai, and discovers he has a younger brother, energetic and precocious Tam. Mai is employed by Mrs. Hoa, the cruel mistress of a great house. After getting a job at the house with his mother, Binh discovers that she is sexually harassed constantly by Mrs. Hoa's son.

While dusting with his mother, Binh lifts a red glass statue of Buddha, a precious family heirloom, to allow his mother to dust. As Binh lifts the statue to see it glow in the sun, the mistress walks in and charges Binh, calling him a thief. As Binh tries to keep the Buddha safe in his arms, the mistress slips on a wet patch of the floor, falling to her death. Binh and his mother quickly escape the house back to their apartment. They frantically pack the belongings of Binh and Tam. His mother gives them American money, the address of Binh's American father, and passage on a boat.

Binh and Tam both make it onto a boat bound for the United States, but a storm knocks them off course and instead takes them to Malaysia. Stuck in a refugee camp, Binh and Tam adapt to their new circumstances and meet Ling, a Chinese prostitute whose passage to America was also detoured to Malaysia. Binh and Ling seem to develop feelings for each other, kissing after Ling sings a ballad in Mandarin and dances for him.

Ling had been selling sexual favors for some time (though she dreams of a life as a singer) and had managed to buy herself, Binh, and Tam's way out of the refugee complex and onto a barge captained by the British Captain Oh. During the voyage Binh, Ling, and Tam suffer under shortages of food and rationing of fresh water. A gambling game (two contenders shout off American brand names in succession) threatens the other passengers by unfairly winning their food, water, and money. Several people succumb to the conditions, as does little Tam. A heartbroken Binh and Ling give him a funeral at sea.

The immigrants finally reach the United States, but are quickly rushed into transport trucks, bound for Chinatown in New York City. Binh works at a Chinese restaurant as a delivery boy and Ling works in a Chinatown cabaret, though she still keeps prostitution as her main source of income. Ling eventually meets a wealthy businessman to support her. Binh's feelings for Ling go unanswered. Binh sends a letter explaining Tam's death to his mother, along with all the money he had saved thus far.

Binh finds out (over a poker game with his friends) that Vietnamese children born to American fathers are allowed free airplane passage to the United States and granted citizenship. Angry because he didn't have to lose his brother, he promptly leaves his job and hitch hikes toward Austin, Texas, meeting amputee Vietnam War veterans and a Hispanic family along the way. Upon reaching the address Binh finds a woman, his father's ex-wife. His father had relocated after their divorce, working as a handyman at a ranch in Sweetwater, Texas. Binh is finally confronted with his father, blinded after opening a crate filled with explosives he thought was beer during the war. While Binh doesn't confess that he's his son, his father realizes it and the film ends with Binh and his father joking and laughing as he cuts his father's haira